War of 1812 Reenactment at Sackets Harbor

My Regency Beau and I braved the heat on August 4 to attend a War of 1812 reenactment at the Sackets Harbor Battlefield, and enjoyed ourselves very much indeed.

I must admit that this occasion brought out my inner Lydia Bennet more than once.  "She saw all the glories of the camp; its tents stretched forth in beauteous uniformity of lines..." 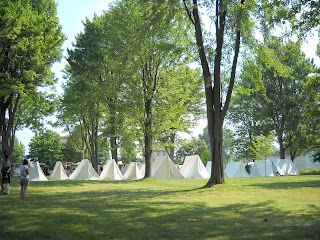 "Their eyes were immediately wandering up in the street in quest of the officers, and nothing less than a very smart bonnet indeed, or a really new muslin in a shop window, could recal them."  (As you can see, my eyes were recalled.  I did not purchase this gown, but I bought several smaller items from Helen's Haberdashery.) 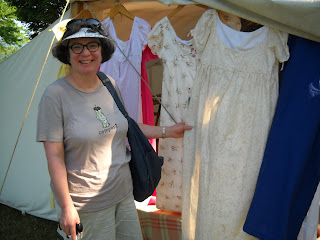 An outdoor kitchen consisted of an open firepit and cast-iron utensils.  (Make a mental note:  This arrangement may prove useful during the next major power outage in the Northeast.) 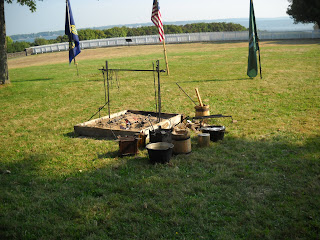 This vegetable garden is actually a seasonal battlefield exhibit rather than part of the encampment.  Lake Ontario is in the background. 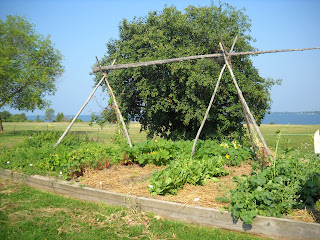 Wood being split for another kitchen, with a sign at left welcoming the public. 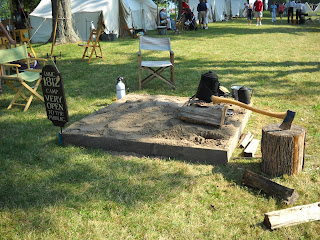 And indeed members of the public--of all ages--were made very welcome. 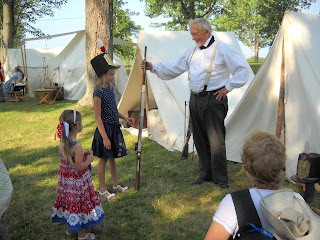 This member of a Kentucky regiment explained that he was fighting on the British/Canadian side for the day, owing to a shortage of Canadians. 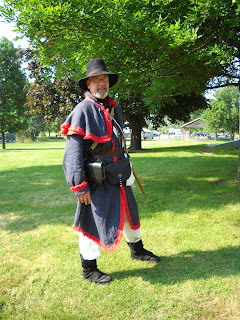 Redcoats on parade, with the Kentuckians included.  A handsomely gowned officer's wife (at right) records the scene. 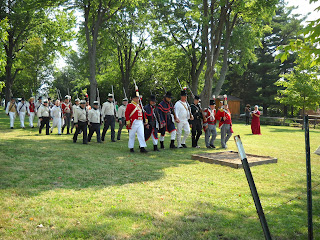 An American rifleman (regiment not noted, unfortunately) shows Regency Beau the advantage of a green uniform over a British red one:  camouflage! 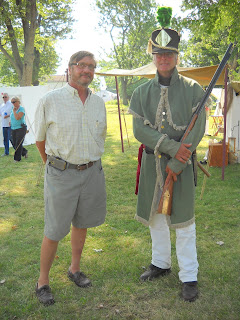 Not all of the American troops were actually gentlemen:  These ladies donned uniforms. But other ladies assumed more traditional feminine roles and attire. 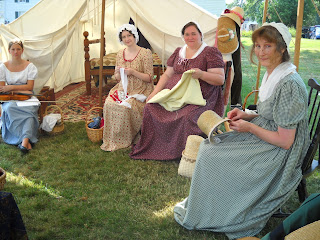 Although (in an effort to avoid the worst of the heat) we arrived too early for the actual reenactment of combat, we did see some rifle drill on both sides.  Here, the Americans prime and load--a rather time-consuming process by present-day standards. 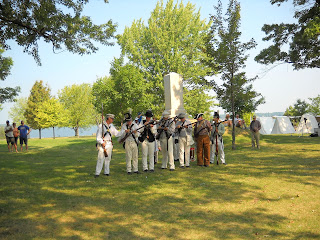 The result was a very satisfactory volley, however. A representative of the Senecas (the "People of the Hill") explains to Regency Beau and others why the Senecas and several other Haudenosaunee (Iroquois) nations fought with the British and against the Americans during the Revolutionary War and afterward. 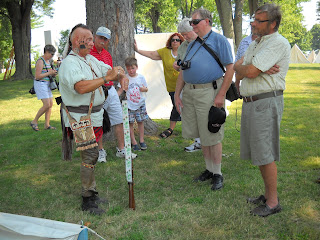 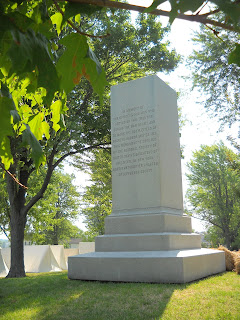 A closeup of the monument's inscription explains that the actual bicentennial of the Battle of Sackets Harbor will be in 2013.  (And a bigger reenactment is planned for next year.) 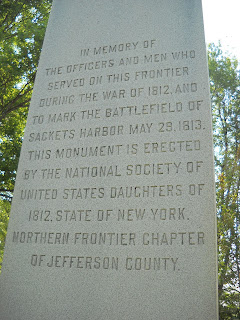 As the morning wore on toward noon, sensible ladies like this mother and daughter retired into the shade--and your RC and her RB soon sought both shade and lunch.  But we plan to return for next year's reenactment, and we encourage you to do likewise! 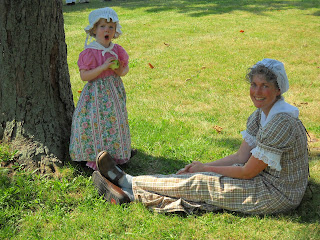