Here’s a reminder of our All Hallows meeting on Nov. 2, and an announcement of plans for our Christmas/JA’s birthday meeting on Dec. 7. The time for both meetings will be 2 pm. 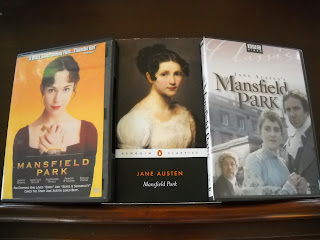 On Saturday, November 2, at RiverRead Books (5 Court St., Binghamton), we’ll discuss “Slavery and Servitude in Mansfield Park.” Until the Patricia Rozema film version of MP appeared in 1999, few readers paid much attention to the references to Sir Thomas Bertram’s plantation in Antigua--but the Rozema film, though it exaggerated these, at least made many of us notice them. How does the fact that Sir Thomas’s fortunes are partly founded on slavery affect our views of him, of Fanny Price’s situation, and of Mansfield Park in general? We’ll start our observance of MP’s bicentennial in 2014 by considering these issues--as well as how the Rozema film relates to the novel generally.

On Saturday, December 7, we’ll gather for a joint meeting with the Jane Austen Book Club-CNY of Hamilton. Please note a change of venue for this meeting since our August 18 blog post: We’ll assemble on the third floor of the Colgate Bookstore (3 Utica St., Hamilton) to hear Deborah Knuth Klenck, JASNA Syracuse member and Professor of English at Colgate University, present a talk titled “Performing to Strangers: Being, Seeming, and Courting in Pride and Prejudice.” Deborah was unfortunately unable to give this talk at the 2013 JASNA Annual General Meeting in Minneapolis, so both she and we are eagerly looking forward to it in Hamilton!

And for refreshments at the Dec. 7 meeting, we’re going to Plan C--for Cookies! We propose a cookie potluck: Each attendee is asked to bring a dozen or so cookies to share. If you haven’t got time to bake, that’s OK--we’re not expecting Martha Stewart to come. But if you come to “have your share of the conversation,” do bring a share of the cookies! Tea and lemonade will be provided.

Here's a photo essay from this year's JASNA Annual General Meeting in Minneapolis, "Jane Austen's Pride and Prejudice...Timeless."(All photos are by your Regional Coordinator, A. Marie Sprayberry. Remember that you can click on any photo to enlarge it.)

In Minneapolis, fictional home to The Mary Tyler Moore Show... 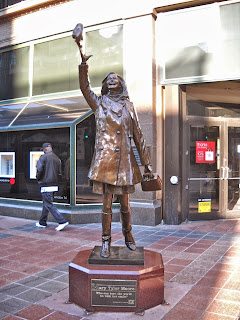 ...we celebrated the 200th anniversary of another spunky heroine, Elizabeth Bennet! Nicely illustrating the mingling of the Regency era with the 21st century, here's NY Metro Co-Regional Coordinator (and my roommate) Meg Levin against the Minneapolis skyline. 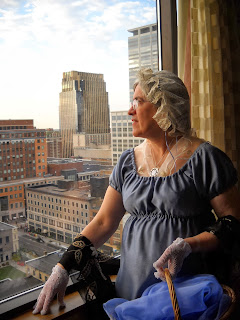 The "Meryton Market" Emporium was of course a beehive of activity throughout the AGM. Here, the hard-working staff of Jane Austen Books rings up an early transaction. 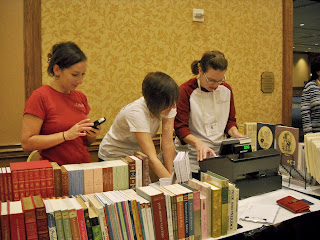 An outstanding feature of this AGM was the "Regency Room," containing an exhibition of costumes from the Guthrie Theater's recent production of P&P plus a dazzling array of items from author and Minnesota Region member Candice Hern's collection of Regency-era magazines, fashion prints, and other artifacts. Below, a few of Hern's reticules, purses, and other "beautiful ornaments" that would have made Lydia Bennet "quite wild"! 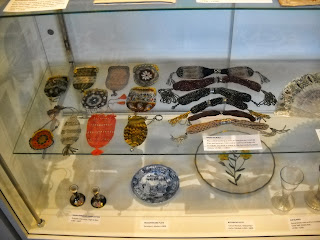 Two of the Guthrie's costumes, along with a display of items from Hern's collection relating to the 1817 death and funeral of the Prince Regent's only daughter, Princess Charlotte. (For more information about Charlotte, go here for your RC's Persuasions On-Line paper about the Prince Regent, "Sex, Power, and Other People's Money.") 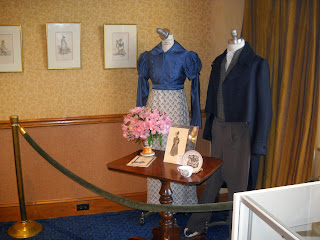 The author signing on Friday evening was another highlight. Plenary speaker John Mullan could hardly keep up with the demand for his book What Matters in Jane Austen?. 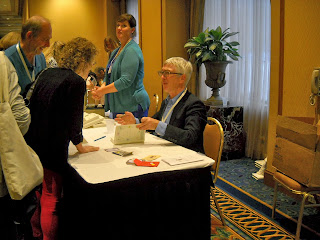 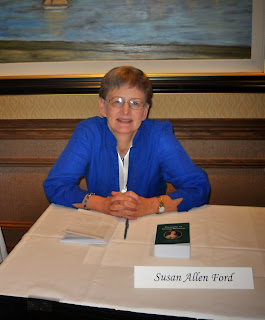 ...and Kathleen Anderson (left) and Susan Jones, Co-RCs for the South Florida Region and authors of Jane Austen's Guide to Thrift. 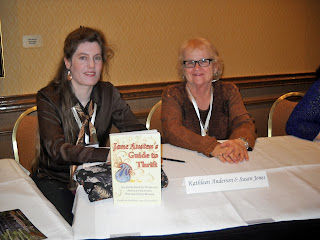 The banquet and ball on Saturday night included a number of celebrities! While your RC had a chat with Her Majesty Queen Elizabeth II... 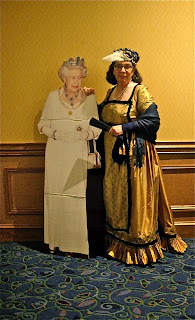 ...we were also honored with the presence of "Dr. and Mrs. James Fordyce"... 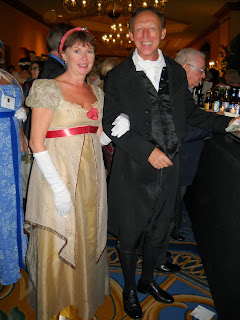 ...and the Regency-era traveler "Lady Hester Stanhope" (who had obviously just returned from the Middle East)! 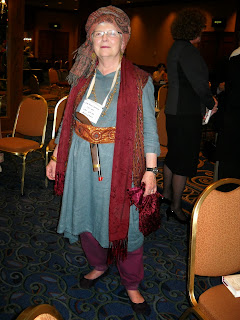 Two Janeites who would be celebrities at any AGM: Former Syracuse Region member and present NY Capital Region member Diane Levine greets the one and only Baronda Bradley of North Texas. Baronda's ball costume--a show-stopper as usual--harks back to 1775, the year of Jane Austen's birth. 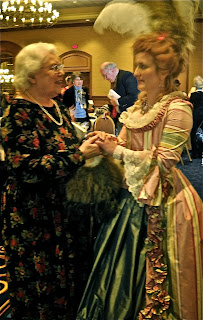 The AGM closed with a panel presentation at Sunday brunch highlighting another meeting between the Regency era and the 21st century: the YouTube sensation The Lizzie Bennet Diaries. Your RC was unfortunately too far from the dais to get a good photo of the panelists, Bernie Su, Kate Rorick, and Jenni Powell, but here's a slide from the presentation. 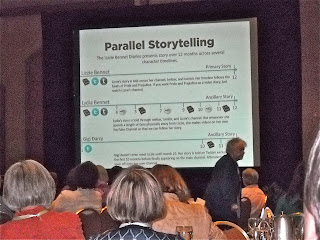