The JASNA Syracuse Region is very pleased to announce its first collaboration with the Jane Austen Singing School for Young Ladies: "A Georgian Christmas with Jane Austen," a concert to be held in the Fellowship Hall of the First Presbyterian Church of Skaneateles on Sunday, December 19, 2010, at 3 pm. (Note the difference in day and time from our usual Saturday 2 pm meetings.) Although your Regional Coordinators have been warm admirers of the School and its director, Dr. Joanna Manring, since the School's first concert in November 2009, this program will be the first in which the School and JASNA Syracuse have actually worked together.

Co-Coordinator Lisa Brown has assisted Dr. Manring and the Young Ladies in ensuring the historical authenticity of the vocal selections. (Many of the carols familiar to present-day Americans come from the mid-19th century or later, and thus would not have been familiar to JA and her contemporaries.) And perhaps some English country dancing will be on the program as well! Finally, in honor of JA's 235th birthday on December 16, Coordinator A. Marie Sprayberry will read from the Rev. George Austen's letter announcing his second daughter's birth, and will recite the epigraph to Rudyard Kipling's short story "The Janeites"--a traditional birthday toast in many JASNA Regions. Admission to the concert is free, but donations to support the continuing work of the Singing School are welcome. We hope that Janeites from all over Upstate New York will attend this very special event!
Posted by Jane at 3:28 PM No comments:

This year’s Annual General Meeting (AGM) of JASNA--”Mystery, Mayhem, and Muslin: Jane Austen and the Abbey”-- was held October 29-31 at the Hilton in Portland, Oregon, and a hugely enjoyable time it was. Excellent accounts of this AGM are already available on other blogs: Maggie Sullivan’s AustenBlog, Laurel Ann Nattress’s Austenprose, and Deb Barnum’s Jane Austen in Vermont. This report provides yet another perspective. 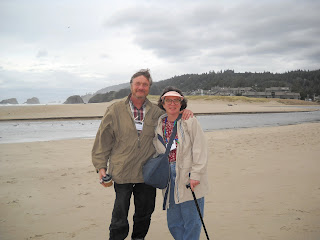 My Regency Beau and I arrived in Portland on Wednesday the 27th. On Thursday, we took the all-day tour to the Oregon coast offered in connection with the AGM. (Above, Regency Beau and Regional Coordinator at Cannon Beach.) Neither of us had previously visited the Pacific Northwest, and we were as much struck with the beauty of the landscape as Anne Elliot is with Lyme. We were also much impressed by what a green (in all senses of the word) and pleasant city Portland is. Any place that can boast an excellent mass transit system, clean and civil streets (even the panhandlers are polite!), Powell’s Books, a large number of pleasant and leafy city parks, superb restaurants, and drive-through espresso bars definitely gets our votes. Even the much-maligned weather actually included two sunny days.

On Friday morning, I was most unfortunately prevented from attending the “Team Tilney Explains It All” panel presentation by the responsibilities of office—the Regional Coordinators’ workshop was in direct conflict—but Mags Sullivan, who headed the panel, provides a splendid account of it on AustenBlog. And the workshop featured its own panel discussion, in which RCs Nili Olay of New York Metro, Bonny Wise of Greater Louisville, and Aspen Anderson of the brand-new Utah Region shared their views on heading regions of different ages, sizes, and needs.

The AGM proper began Friday afternoon with Stephanie Barron’s splendid plenary address, “Suspicious Characters, Red Herrings, and Unreliable Detectives: Elements of Mystery in Jane Austen’s Northanger Abbey.” Barron, well known as the author of the Jane Austen Mysteries, made a case for Henry Tilney as “the consummate detective” and Catherine Morland as a better one than she sometimes seems to be. And in the Q&A period following the lecture, she provided a spirited response to the recent uproar in the press concerning Oxford professor Kathryn Sutherland’s claims about JA’s manuscripts. Click here for a full version of her views on the Sutherland controversy.

The first two breakout sessions followed Barron’s plenary. I attended Elaine Bander’s “‘How Were People, at That Rate, to Be Understood?’: Reading Mysteries at Northanger Abbey,” and Vicky Hinshaw and Kim Wilson’s “About Those Abbeys: A Trip through History, Literature, and the Picturesque.” Elaine Bander, whom I met on the 2009 JASNA tour of England, was as well worth hearing as she always was during the tour. (My favorite comment: the assertion that Catherine, under Isabella's influence, is in danger of becoming "addicted to the literary crack cocaine of the 1790s," but is actually an "excellent empiricist" much of the time and certainly learns to read "the unstable text of John Thorpe" quickly enough!) And Hinshaw and Wilson provided a lively guide to the abbeys whose ruination “has been of infinite use to the landscape of England in general,” as JA put it in “The History of England.” 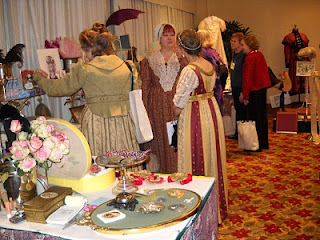 I managed to spend a little time and money in the Milsom Street Emporium on Saturday morning before that day’s sessions began—and, as you can see in the photo above, there were “such beautiful ornaments as made [me] quite wild”! (Well, not quite as wild as Lydia Bennet, but almost.) I encountered Juliet McMaster at the Juvenilia Press table a mere 20 minutes before her plenary address, “‘A Surmise of Such Horror’: Catherine Morland’s Imagination.” With her customary wit and verve, McMaster argued that the “ignorant and uninformed” Catherine, because of (as well as in spite of) her Gothic reading and in spite of (as well as because of) Henry Tilney, ultimately becomes as “finely aware and richly responsible” a character as those preferred by Henry James.

Of the three breakout sessions that followed McMaster’s plenary, I most enjoyed Shannon Campbell’s “The Mystique of the Pineapple: A Lure for General Tilney” and Susan Allen Ford’s “Ingenious Torments: Reading Instructive Texts in Northanger Abbey” (I had the honor of introducing the latter). Since one of my great-grandfathers was an unsuccessful pineapple grower in Florida a century ago, I was greatly interested in Campbell’s description of the difficulties of hothouse pineapple culture in Regency England, and of why General Tilney would have had a “pinery” and taken such pride in it. Ford—well known to all JASNA members as the editor of Persuasions and Persuasions On-Line--began by looking at the essay in the Mirror that Mrs. Morland wants Catherine to read, which describes the ill effects of grand society on “John Homespun’s” daughters. She then went on to examine other instructive essays and conduct books that are implicitly present in the novel, as well as one “anti-conduct” book: Jane Collier’s An Essay on the Art of Ingeniously Tormenting, reflected in both Henry’s and Catherine’s frequent use of the words “torment” and “tease.” Ford will address JASNA Rochester in May, and her topic then will be Mr. Collins and Fordyce’s Sermons! 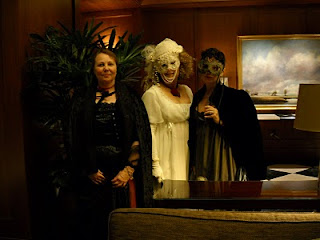 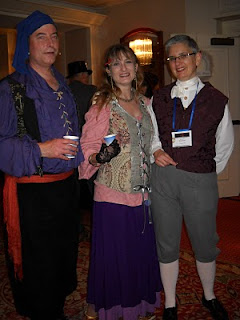 Because of the Halloween theme, the ingenuity of the costumes at Saturday night's banquet and Bal Masque surpassed anything I'd seen at previous AGMs. There were a couple of zombies and a sea monster, in homage to the recent spate of Austen “mashups”; several gypsies and pirates; and many amazing masks. I'm sorry I didn't get the names of the three spectrally elegant ladies in the first photo above; in the second, Rochester's Celia Easton (at right) pauses with Fort Worth's legendary Baronda Bradley and Baronda's Regency Beau. Joining other banqueters in assuming different identities for the evening, my own Regency Beau and I called ourselves “Mr. and Mrs. John Homespun” in honor of Ford’s breakout session. (Below, Mrs. Homespun whispers her hopes that such grand society will not have any ill effects on Mr. Homespun. Mr. Homespun doesn't seem too worried.) 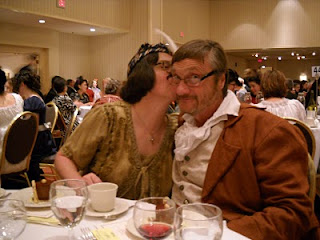 After the Regional Coordinators’ business meeting on Sunday morning came both the business and the considerable pleasures of brunch. First, Bonnie Helm, the winner of the J. David Grey Writers’ Workshop first prize, read her essay “Exposure of Truth”—an imaginative alternative version of the crucial Northanger Abbey scene in the late Mrs. Tilney’s bedroom. Then the second- and first-place winners of the annual JASNA quiz were announced. It would be both immodest and unbecoming of me to state the top finisher’s name directly here. Suffice it to say that the quiz championship has returned to Syracuse—and that Mags Sullivan was spontaneously impelled to bestow an honorary “Team Tilney” membership upon yours truly!

Then came the customary previews of the next two AGMs. New York Metro’s RCs, Nili Olay and Jerry Vetowich, gave bravura performances to advertise the 2012 AGM, “Sex, Money, and Power in Jane Austen’s Fiction”—although Jerry was with difficulty prevented from giving a performance on his bassoon. Not to be outdone, the committee for the 2011 AGM in Fort Worth, “Jane Austen: 200 Years of Sense and Sensibility,” showed a video in which scenes from the 1995 film of S&S were intercut with scenes from John Wayne movies. I haven’t laughed that hard at a Western since Blazing Saddles.

The AGM concluded with a panel discussion called “Dispute without Mayhem,” which in fact involved neither mayhem nor serious dispute. Indeed, the panelists--William Phillips, Joan Klingel Ray, and Diana Birchall--agreed that both Northanger Abbey and its heroine deserve more respect than they sometimes get. At the end, they all declared themselves members of “Team Catherine.” (To my mind at least, this involves no real conflict with “Team Tilney.”) 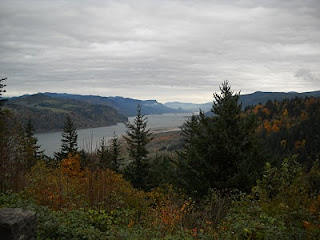 A delightful Sunday afternoon at Powell’s Books and the Multnomah County Library’s “Lit Chicks” exhibit of late Georgian first editions and caricatures, and the Monday all-day tour of the Columbia River Gorge (above) and Mount Hood, concluded our AGM experience in Portland. And it would be highly improper to conclude this account without heartfelt thanks to the Portland organizers, Susan Schwartz, Pauline Beard, and Frank McClanahan, for all they did to make this AGM welcoming and memorable.
Posted by Jane at 8:46 PM No comments: