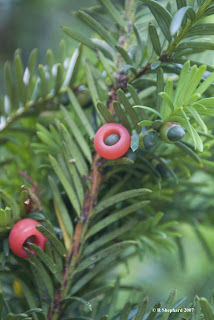 Although Prince Albert, consort of Queen Victoria usually gets the credit for bringing the Christmas tree to England, it was actually Queen Charlotte, wife of King George III, who was responsible for England's first Christmas tree. German born Charlotte set up the first known English tree at Windsor in 1800.


"In the middle of the room stood an immense tub with a yew tree placed in it, from the branches of which hung bunches of sweetmeats, almonds, and raisins in papers, fruits and toys, most tastefully arranged, and the whole illuminated by small wax candles. After the company had walked around and admired the tree, each child obtained a portion of the sweets which it bore together with a toy and then all returned home, quite delighted."

A Report from the Big Apple

Your Regional Coordinator had a wonderful "all-Austen" day in New York City on December 5. First, in company with her hostess, Margarita Levin, and several other JASNA New York Metro friends, she visited the "A Woman's Wit: Jane Austen's Life and Legacy" exhibition at the Morgan Library and Museum. This exhibition is everything everyone has said it would be, and CNY Janeites are urged to make every effort to see it before it closes on March 14. The Morgan is located at 225 Madison Ave. in NYC.

The exhibition includes a generous selection of JA's letters to her sister, Cassandra (several written in the paper-saving criss-cross style described by Mrs. Bates in Emma as "chequer-work"); the first several letters from the fair copy of Lady Susan, to which a few heavily marked-up pages from the rough draft of The Watsons present an intriguing contrast; one of the letters JA received from the Prince Regent's librarian, the Rev. James Stanier Clarke (who, perhaps fortunately, never seems to have realized the close resemblance between himself and Mr. Collins!); JA's "Plan of a Novel," incorporating helpful hints from the Rev. Clarke and other self-appointed critics; a rich assortment of supplementary material (too much to list here, but your RC confesses to liking the caricatures by James Gillray best); and the beautiful and moving letter written by Cassandra to niece Fanny Knight after JA's death ("I have lost such a treasure, such a Sister, such a friend...").

The second great pleasure of the day was the JASNA New York Metro quarterly regional meeting, held at the Midtown Executive Club on 45th St. The NYM co-RCs, Jerald Vetowich and Nili Olay, presided with characteristic flair. After a brisk diversion called "Mrs. Jennings's Match Game" (involving pairing up suitable characters from different Austen novels; even the relentless Mrs. J herself might have been stumped by this!), the day's main event was a presentation on "Women's Health Issues in Jane Austen's Time" by longtime JASNA member Dr. Cheryl Kinney of Texas. This highly informative and entertaining talk covered a wide range of topics: mother and infant mortality rates in 1809; the respective knowledge bases and social roles of "quacks," apothecaries, barbers, surgeons, midwives, and "gossips" (neither term in quotes had the meaning it has today); the status of birth control efforts (primitive/ineffective) and sexually transmitted diseases (widespread/virulent); some appalling treatments for menopause; and, finally, the various current theories about the cause of JA's death at age 41 in 1817. Of these last, the most interesting to your RC by far is the idea that JA could have caught a form of tuberculosis from her brother Henry, whom she nursed through a serious illness in London at the end of 1815. Henry is known to have had a serious respiratory ailment during the very early 1800s, but he survived both this and the 1815 attack and lived until 1850, so he may have had a less deadly form or less virulent strain of TB. JA, alas, was not so fortunate: She may have had the form affecting the adrenal glands, which at that time was invariably fatal.

The talk was followed by an excellent tea, the traditional birthday toast to JA, and a raffle drawing. And the visiting member from Upstate--JASNA NYM generously considers all NY State JASNA members as its own--was made to feel most welcome.
Posted by Jane at 2:44 PM No comments:

JASNA Syracuse's next informational meeting about JASNA and membership in JASNA will be held at Books & Memories, 2600 James St., Syracuse, on Saturday, February 6, 2010, at 2:00 PM. Our original intention was to try to hold JASNA Syracuse meetings on or about the "quarter days" that Jane Austen would have known (Michaelmas, Sept. 29; Christmas; Lady Day, March 25; and Midsummer, June 24). However, the realities of modern life convinced us that trying to hold a meeting near Christmas would be impractical. So we've decided to hold a meeting near "Candlemas" (February 2), the date that marked the end of the extended Christmastide in JA's time--as those of you who attended Lisa Brown's "A Regency Christmas" presentations in Oswego and Rochester now know! As this meeting's example of "what we talk about when we talk about Jane Austen," we've chosen to discuss Pride and Prejudice and at least some of the "paraliterature" offerings (sequels, retellings, etc.) it has inspired, since this meeting date is also close to the anniversary of P&P's publication on January 28, 1813.
Posted by Jane at 7:00 PM No comments: