A Musical Afternoon in Skaneateles

Soprano and doctoral student in music Joanna Manring announces that she has been conducting a "Jane Austen Singing School for Young Ladies" in Skaneateles this autumn, for pupils between the ages of 12 and 18. Ms. Manring reports that the school's first concert, in costume, will take place on Saturday, November 21, at 2:00 p.m. in the upstairs performance hall of the Skaneateles Public Library. Songs will include music from Jane Austen's personal collection, as well as a few solo songs from popular film adaptations; readings will be interspersed. The concert is free and open to the public, though donations are appreciated. Music-loving Janeites are urged to attend!

The 31st Annual General Meeting of JASNA, which took place on October 8-11 in Philadelphia, is now history--but it will certainly remain a fond memory for the three members of the Syracuse Region and seven members of the Rochester Region (plus three companions) who attended it. Excellent full accounts of the proceedings are available on several sister blogs, such as AustenBlog and Jane Austen in Vermont (see "Links"); only the Upstate New York highlights will be noted here. 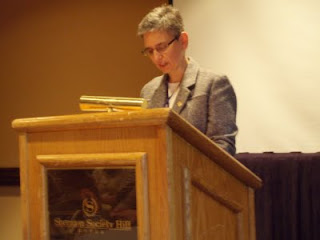 Rochester Regional Coodinator and SUNY Geneseo Professor Celia Easton, above, may have chosen a controversial title for her breakout session ("The Sibling Ideal in Jane Austen's Novels: When Near Incest Really Is Best")--but in fact she reached the interesting and much less controversial conclusion that Austen characters with opportunities to experience "pseudo-sibling" relationships (along the lines of those advocated in Plato's writings) may in fact have the best chances to get to know one another before marrying, and thus the best foundations for solid marriages. 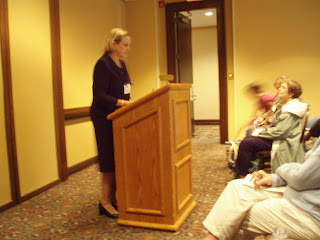 Colgate Professor Deborah Knuth Klenck, above, titled her breakout session "'You Must Be a Great Comfort to Your Sister, Sir': Why Good Brothers Make Good Husbands." The quotation, of course, is from Mrs. Allen's praise of Henry Tilney's knowledge of muslins in Northanger Abbey, and Deborah made the point that brothers who can enter into their sisters' interests as Henry does--or who can otherwise assume a feminine frame of reference, as Frederick Wentworth does in comparing an old ship to an old pelisse in Persuasion--indeed may make much better husbands than "locker room" types like John Thorpe may! 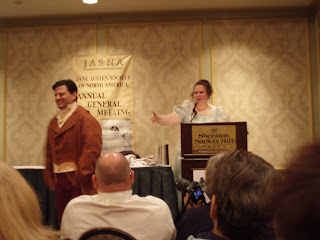 Syracuse Co-Coordinator Lisa Brown's fashion demonstration, "Dressing Mr. Darcy," was agreed by all to be among the biggest hits of this AGM. Beginning with nine volunteer models in shirtsleeves and breeches, Lisa showed how the Regency look for men can be achieved in various ways and on all budgets. The models got thoroughly into the spirit of the occasion, and the audience reaction varied from enthusiastic to downright impudent! 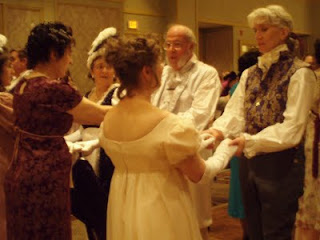 And at Saturday night's Regency Ball, Upstate's accomplished country dancers distinguished themselves. (Of course, they've now had three Jane Austen Balls in Rochester to practice--and all upstate Janeites should make their plans now to attend the fourth edition, on May 2, 2010!)
Posted by Jane at 4:29 PM No comments: