JASNA Rochester ended its 2010-11 season with a special event: Susan Allen Ford, Professor of English at Delta State University in Mississippi and the editor of Persuasions, gave a talk on Saturday, May 21, at the American Association of University Women (AAUW) House in Rochester.

Susan's topic was "Mr. Collins Interrupted: Reading Fordyce's Sermons with Pride and Prejudice." The reference in the title, of course, is to Mr. Collins's attempt to read Fordyce to the Bennets on his first evening at Longbourn--an attempt that Lydia impolitely, though understandably, interrupts. However, as Susan demonstrated for Northanger Abbey and Volume 1 of The Mirror in her breakout session at the 2010 Portland AGM, the connections between P&P and Fordyce's sermons for young women (he also wrote "addresses" to young men) are more extensive than the overt reference in the novel indicates. Many of these connections, of course, are ironic (the contrast between Fordyce's picture of the ideal family situation and the Bennets' less than ideal family life, for example), but some are not: Fordyce's allusions to the harm a badly brought up daughter could do her family are echoed in the danger to the Bennets' prospects caused by Lydia's elopement with Wickham. Susan's forthcoming book on what the characters in Austen's novels are reading will include material from both the Portland AGM presentation and this one, and we look forward to reading the book when it appears!

A delightful tea in the AAUW House's solarium, and informal conversation all over the house, followed the presentation. In the photo below, Edith Lank--co-founder of JASNA Rochester (which actually predates the national organization), charter member of JASNA, and all-around Eminent Janeite--chats with Susan Allen Ford and John Ford. Finally, JASNA Syracuse will be ending its season less formally--but no less delightfully, we trust--with a "Box Hill" picnic at the Lorenzo State Historic Site in Cazenovia on Saturday, June 25. Details about the picnic will follow in the next post.
Posted by Jane at 7:55 PM No comments: 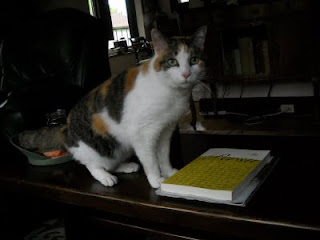 Lady Mary Wortley Montagu wishes to announce that Persuasions #32--the latest edition of JASNA's annual scholarly journal--is now arriving in JASNA members' mailboxes, or should be. (Lady Mary is not, of course, the famous 18th-century traveler and woman of letters, but your Regional Coordinator's cat, named in her honour.) Any JASNA Syracuse Region members who haven't received their copies in a week or so should contact either Marie or Lisa (see "Contact Us" at right for info).
Posted by Jane at 6:32 PM No comments:

The Morning after the Assembly

"That the Miss Lucases and the Miss Bennets should meet to talk over a ball was absolutely necessary; and the morning after the assembly brought the former to Longbourn to hear and to communicate."--Jane Austen, Pride and Prejudice

(Well, OK, it's the evening after, but cut us some slack.) Herewith, some photos from yesterday's 2011 Rochester Jane Austen Ball, co-sponsored by the Country Dancers of Rochester and JASNA Rochester. The afternoon began with an energetic demonstration of Morris dancing; it was May Day, after all, so some use of bells and sticks to encourage Mother Earth was appropriate! 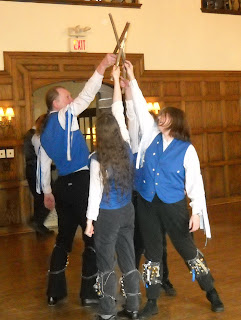 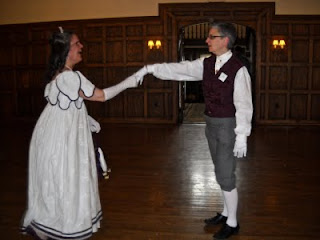 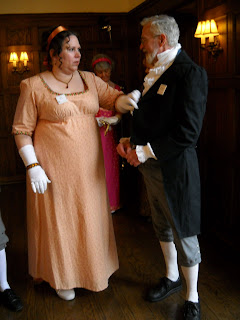 But all worries were forgotten as the Grand March began. 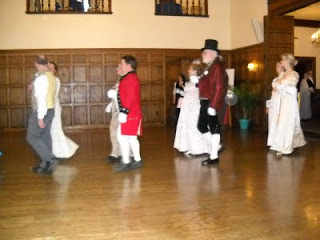 While the dancers disported themselves, the occupants of "Chaperones' Corner" also enjoyed themselves (from left: D. C. Bancroft, Carlotta Carson, and your Regional Coordinator). The recent Royal Wedding was of course discussed; although we agreed that the bride and groom looked wonderful, and wished the new Duke and Duchess of Cambridge well, the trend toward "space alien" hats among younger female guests was roundly deplored! 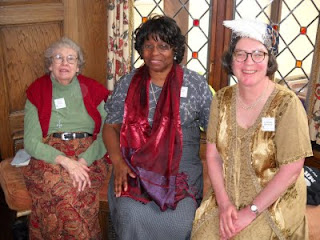 Ms. Bancroft also showed that no lady is proof against the blandishments of a gentleman in a particularly elegant waistcoat. (The two repaired to the dance floor for the dance called "The Bishop" shortly thereafter!) 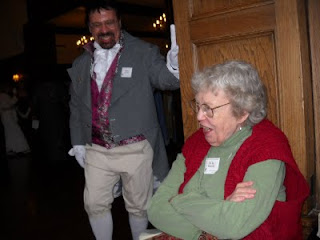 In addition, we appeared to be favored with the presence of some actual characters from the novels. The "Misses Kitty and Lydia Bennet" were certainly enjoying themselves... 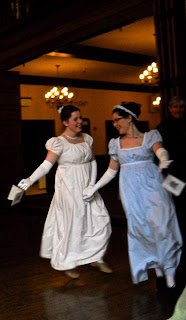 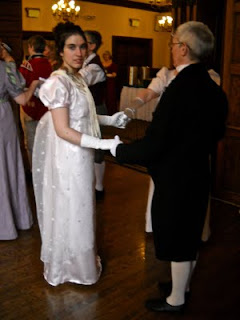 and "the Rev. Edmund Bertram" looked rather wistful as he searched for a "Miss Mary Crawford" in the whirling throng. 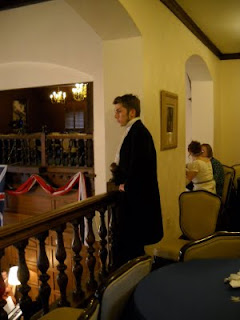 The dancing, viewed from the gallery above, was most elegant. 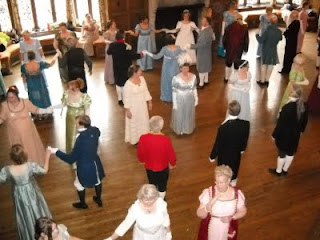 The "acorn and oak" setting for the Ball was decorated in a most Anglophilic manner. 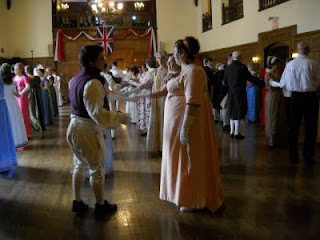 And this gallant officer of the Royal Welsh Fusiliers certainly threw some "body English" into the dance just before the intermission, "The Sun Assembly"! 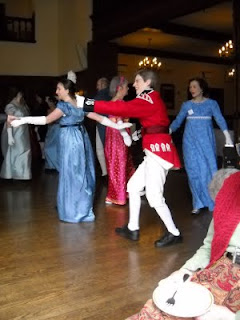