More Photos of the Christmas Concert 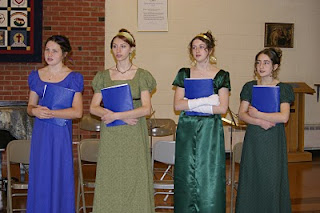 More photos of the JASSYL/JASNA concert can be found here.
Posted by Jane at 1:46 PM No comments:

"A Georgian Christmas with Jane Austen": Concert Photos and Review

It was standing room only on Sunday, December 19, at the Fellowship Hall of the First Presbyterian Church in Skaneateles, for "A Georgian Christmas with Jane Austen"--the first of what we hope will be many collaborations between the Jane Austen Singing School for Young Ladies (JASSYL) and the JASNA Syracuse Region. Herewith, some photos of the concert, annotated by your Regional Coordinator. Unless otherwise noted, the photos were taken by Mr. Bill Hecht and are used by courtesy of JASSYL. The album on JASSYL's Facebook page has many more photos.

JASNA Syracuse members participating in the concert were (from left below) Regional Coordinator Ms. A. Marie Sprayberry, Co-Coordinator Miss Lisa Brown, and Ms. Banna Rubinow. Ms. Sprayberry read two birthday tributes to Jane Austen: the epigraph to Rudyard Kipling's "The Janeites," and the Rev. George Austen's announcement of his second daughter's birth ("We have now another girl..."). Miss Brown acted as dancemistress to the JASSYL members and provided the audience with a short introduction to English country dance. And Ms. Rubinow (who is also the mother of Lt. Doran Baltus; see below) gave a wonderful reading of the scene-setting "Christmas at Bracebridge Hall" from Washington Irving's The Sketchbook of Geoffrey Crayon. 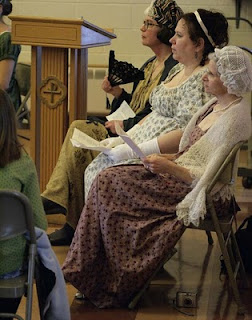 But the real stars of the show, of course, were the Young Ladies and their dynamic director, Dr. Joanna Manring. Dr. Manring, photographed here during the dancing, did an outstanding job of working with the Young Ladies and Gentlemen. (This is not mere lip service; your RC was present at the dress rehearsal!) 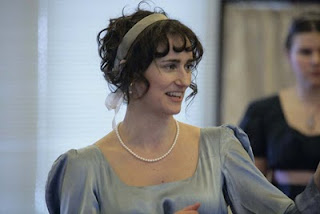 The Young Ladies were (L to R below) the Misses Ellie Crough, Rebecca Gould, Allison Purdy, and Emily Short... 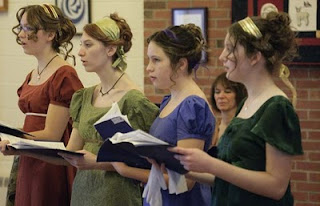 ...and (L to R below) the Misses Grace Magee, Julia Hearn, Christina Marshall, and Phoebe Glowacki. All eight did excellently. The Misses Crough, Marshall, and Glowacki are JASSYL "veterans," and it's been a particular pleasure to watch and hear them develop as performers from concert to concert.

As the concert title "A Georgian Christmas..." indicates, the chosen carols were ones that Jane Austen might at least theoretically have known. In some cases, they were quite unfamiliar to a present-day U.S. audience ("Rejoice, Ye Tenants of the Earth," "Let an Anthem of Praise," and "Christians, Awake!"); in other cases, they were familiar lyrics set to unfamiliar music (for example, "Hark! The Herald Angels Sing" was sung to a tune by the eminent musician Dr. Charles Burney, father of one of JA's favorite novelists, Frances Burney); and in still other cases, they were quite familiar ("O Come, All Ye Faithful," "Joy to the World," and "The Twelve Days of Christmas"). Interspersed with the carols were seasonally appropriate brief readings from JA's published and unpublished works. Among the most enjoyable of these was JA's delightfully sassy 1798 letter to Cassandra ("I wish you a merry Christmas, but no compliments of the Season").

The Young Ladies were joined in the familiar carols by several Young Gentlemen: Mr. Thomas Grande (who also assisted Miss Brown with the dance instruction), Lt. Doran Baltus, Lt. Adam Connor, Mr. Jeffrey Connor, and Mr. Will Tobin. Below, the combined Young Ladies' and Gentlemen's chorus, watched by a most appreciative audience. 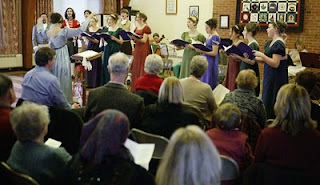 And, as this photo of Lt. Connor demonstrates, it's probably a good thing Miss Lydia Bennet wasn't in the hall! 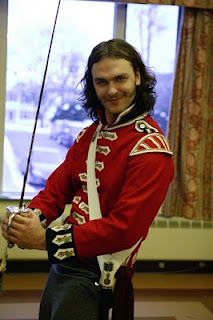 The singing was followed by dancing, as befitted a Georgian revel! Dr. Manring and Mr. E. Robinson (the front couple below) joined the aforementioned Young Gentlemen and several of the Young Ladies in "The Duke of Kent Waltz" (the Duke for whom this was named was King George III's fourth son and the father of Queen Victoria) and "The Old Wife behind the Fire." 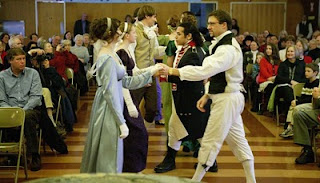 And the Young Ladies and Gentlemen enjoyed a hearty and well-deserved round of applause at the end of the concert! 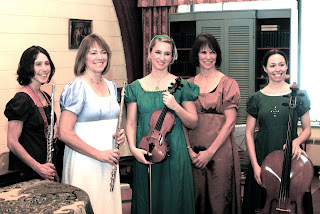 "A Georgian Christmas with Jane Austen": Update and Rehearsal Photos

Further details about the "A Georgian Christmas with Jane Austen" concert on December 19 in Skaneateles, to be presented by the Jane Austen Singing School for Young Ladies and the JASNA Syracuse Region, are now available! The Young Ladies appearing in the concert will be Ellie Crough (Manlius Pebble Hill), Emily Short (Marcellus), Becca Gould (Tully), Christina Marshall, Phoebe Glowacki, Grace Magee, Julia Hearn, and Allison Purdy (all students at Skaneateles Central Schools). Claire Howard, former manager of the Skaneateles Festival, will be accompanying the Young Ladies on piano and will be joined by Eleanor Wilcox and Kate Klein on flute, Caroline Manring on viola, and Emily Dean on cello.

And not only is English country dancing definitely on the program, but the Young Ladies will be joined by several Young Gentlemen for the dancing: Doran Baltus (Manlius Pebble Hill), Jeffrey Connor (Cornell), Adam Connor (University of Vermont), and Will Tobin (Cornell). JASNA Syracuse Co-Coordinator Lisa Brown has been providing dance coaching to the Young Ladies and Gentlemen. 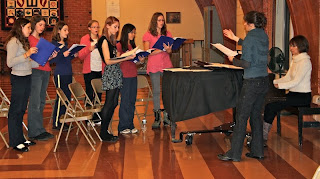 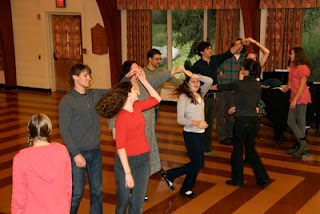 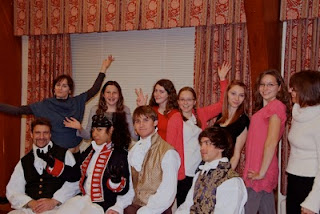 So do come to the Fellowship Hall of the First Presbyterian Church, 97 E. Genesee Street, Skaneateles, at 3 p.m. on Sunday the 19th. Clearly,"A Georgian Christmas with Jane Austen" is going to be a memorable occasion!
Posted by Jane at 7:38 PM No comments: