JASNA Syracuse Meeting in Binghamton May 10, and Other News 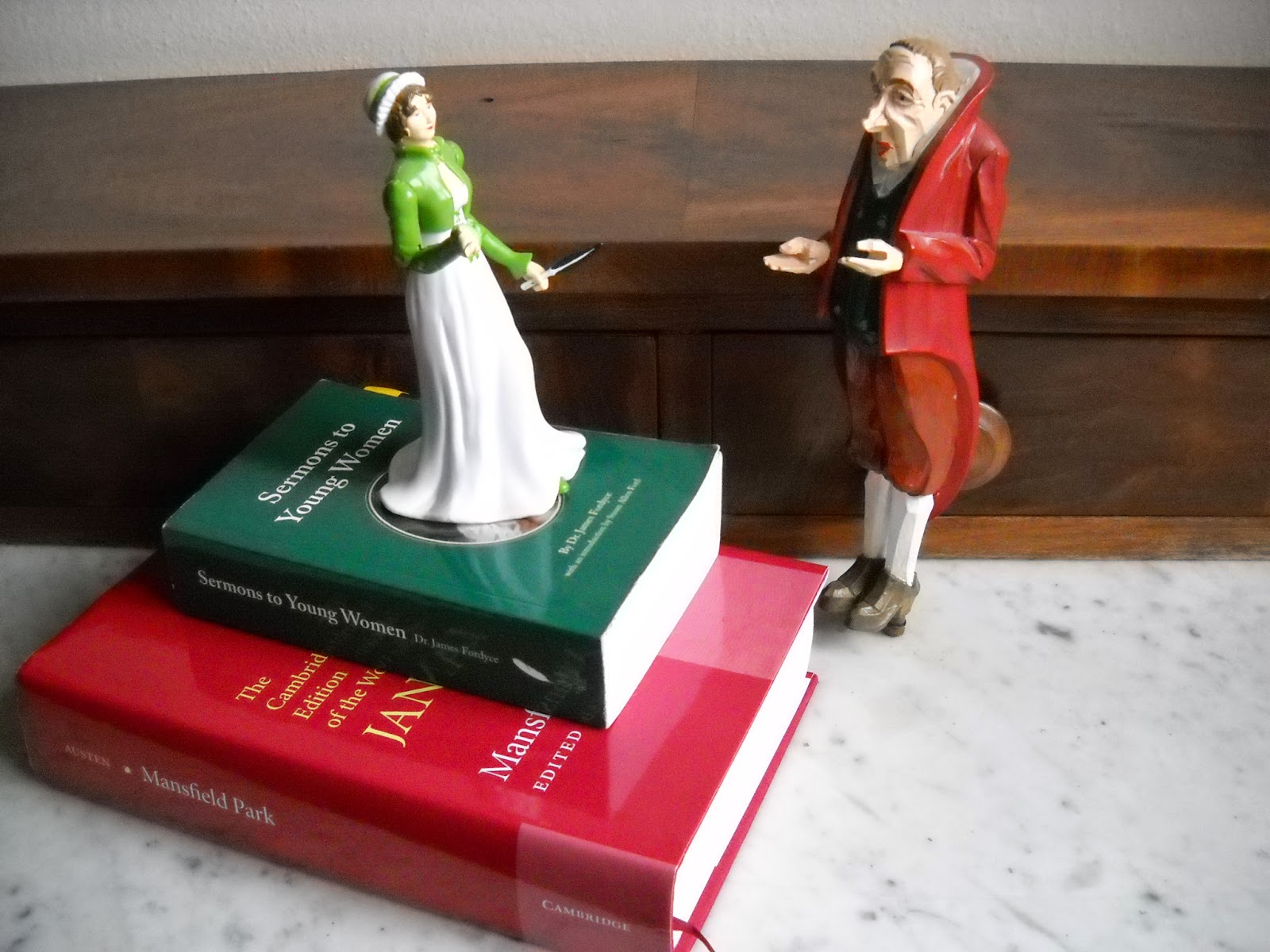 Lots of news as we head into May!

First, the JASNA Syracuse Region will be holding its May Day meeting (a trifle late) on Saturday, May 10, at 2 pm at RiverRead Books, 5 Court St., Binghamton. Our topic will be the clergy in Jane Austen’s times and in her novels. Because Mansfield Park is probably the novel in which being a clergyman is discussed most extensively--and because 2014 is this novel’s bicentennial year--we’ll probably emphasize MP. But don’t worry: We won’t neglect Mr. Collins and Fordyce’s Sermons, Mr. Elton’s social aspirations, or Henry Tilney’s expertise in muslins! (In the photo above, Action Jane Austen seems well prepared to discuss the Sermons with a Mr. Collins stand-in.)

Second, all 80 of the dancers’ spots for the Jane Austen Ball in suburban Rochester on Sunday, May 4, are now taken--but there’s still time to purchase an observer’s ticket if you hurry! More information can be obtained here.

Third, registration for the 2014 JASNA Annual General Meeting, to be held in Montréal Oct. 10-12, is scheduled to open in mid-May. (A post announcing the opening will go up as soon as it happens. In the meantime, go here for further information.) This year's theme is "Mansfield Park in Montréal: Contexts, Conventions and Controversies." And, as in Brooklyn two years ago, both of your Regional Coordinators will be giving presentations: Lisa Brown will be giving a workshop titled "Fit to Be Tied: The Honourable John Yates's Guide to Tying a Cravat," and A. Marie Sprayberry will be presenting a breakout session titled "Fanny Price as Fordyce's Ideal Woman? And Why?" (Look for a few ideas from the breakout at the May 10 Binghamton meeting!)

Fourth, the second annual Jane Austen Summer Program will be held at the University of North Carolina-Chapel Hill campus on June 12-15. This year, Sense and Sensibility will be the focus--and a Syracuse Region member will be one of the speakers: Professor Deborah Knuth Klenck of Colgate University will present a talk titled “Jane Austen’s School of Rhetoric: Style, Substance and ‘Delicacy of Mind.’” (Note: Marie enjoyed last year’s JASP very much, and regrets that conflicting commitments will prevent her from attending this year.) For more information, go here.

Finally, in lieu of a more typical “Box Hill” event in June to conclude the 2013-14 JASNA Syracuse season, your RCs are in the early stages of planning with the JASNA Rochester “Janeiacs” for a joint July visit to Seneca Falls--just at the boundary between the Syracuse and Rochester Regions. We could visit the National Women’s Hall of Fame and/or the Women’s Rights National Historical Park, and take some light refreshment at the Gould Hotel (formerly the Hotel Clarence). Carpooling from Syracuse with Marie would be available, and carpooling among other members would be encouraged. No date for the event has been set thus far, but watch this space for further news!
Posted by Jane at 2:41 PM No comments:

First, Sandra Stevens died on March 17. Sandra was the skilled "mantua-maker" featured in this post last year on the JASNA Syracuse blog, and was a dedicated member of both the JA Book Club at the Colgate Bookstore and JASNA Syracuse. I got to know Sandra better through her work on the Regency gown featured in the blog post, and I'm grieved that such a gentle and talented person was taken from us so soon. We send our condolences to Sandra's daughters, grandchildren, and other family members.

Second, Jane Stuart-Andrus--a co-owner of RiverRead Books, JASNA Syracuse's congenial meeting place in Binghamton--died on April 5. Jane's online obituary is a wonderful tribute to a life excellently and energetically lived. We send our sympathies to Jane's family and to her fellow RiverRead co-owners, Connie Barnes and Patricia Hutchinson-Day.


I'll send out a reminder about our JASNA Syracuse May Day meeting at RiverRead (5 Court St., Binghamton, Saturday 5/10, 2 pm) as we get closer to the date.