An Adirondacks Youth Musical Version of Pride and Prejudice

Upstate New York can now lay claim to being the birthplace of not one but two musical versions of Pride and Prejudice! The "Bake and Jake" version--Pride and Prejudice: A Musical, by Lindsay Warren Baker and Amanda Jacobs of Rochester--has distinguished itself in New York City and is well known to many Upstate Janeites. But here now is a second one, which will receive its world premiere in the Adirondacks next month. North Country residents and vacationers, mark your calendars for August 10-11!


Here is the press release about this version as we received it from director and librettist Kathleen Recchia:

********
KEENE VALLEY, NY—This year marks the 200th anniversary of the publication of Jane Austen’s novel “Pride and Prejudice” so what could be more appropriate than the production of a new musical adapted from her classic novel.

Kathleen Recchia of Jay (who has portrayed poet Emily Dickinson throughout the North Country) has been working on this musical for about six years but it wasn’t until the subject matter captured the interest of her musician-son Sam that the project zoomed into high gear and became a reality. Ms. Recchia has written all the lyrics and some of the melodies, but, as she says, “I’m just a plunker. I’ve never taken any music theory course and don’t follow any musical rules. So I needed someone (in this case, my son) to make music out of all this.”


Other musicians have offered guidance, tips and some sort of framework along the way, but it is recent Keene Central School graduate, Sam Balzac, who has put it all together including overture, scene change music, and orchestration.
The play will be produced through the Book & Blanket Players Youth Theatre sponsored by East Branch Friends of the Arts. It will be performed on Sat., August 10 at 7 PM and Sun., August 11 at 3 PM, following a week-long intensive theatre workshop at Keene Central School in Keene Valley.
Recchia has directed these Iron-Man (put-it-together-in-a-week) musicals with the kids before including an original musical that she and her son wrote called “Road to Dannemora.” But she is concerned that this year will be even more challenging. She says, “I’ve left much of Jane Austen’s language intact because I love it so. But it will be like teaching the kids Shakespeare. ”
Can it be done in just a week? She answers, “Folks will have to come and see for themselves. I’m optimistic that the kids will pull it off. Many of them are Jane Austen devotees, including our 10-year-old Mr. Bennet who has seen every screen adaptation of “Pride and Prejudice” that has been produced and who has very strong feelings about his likes and dislikes.”
The cast of this original musical production of “Pride and Prejudice” consists of 27 students ranging in age from 8 to 18. Recchia’s son, composer Sam Balzac (who is also assistant directing) will take on the role of Mr. Darcy. Jessica Kemp of Saranac Lake is Elizabeth Bennet. The kids are primarily from the North Country but there are even students from the Catskills, Long Island, and Massachusetts, coming to join the North Country cast.
The performances are free but donations will be accepted to help defray costs.
For reservations or to learn more about the musical “Pride and Prejudice,” call 518-946-8323 and check out the Facebook page: Book & Blanket Players.
Posted by Jane at 12:38 PM No comments: 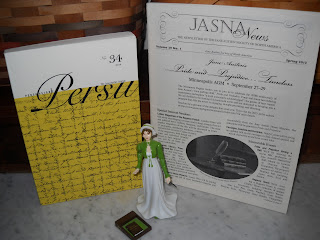 If you’re a "friend of Jane Austen" but are not presently a member of JASNA at the national level, here’s a reminder that now is a great time to join (or rejoin) JASNA! The JASNA membership year officially runs from September 1 to August 31--but if you join between July 1 and August 31, you'll receive an extra issue of JASNA News (the Society's thrice-annual newsletter) and otherwise be enrolled through September 1, 2014. The benefits of national membership include not only JASNA News, but Persuasions (JASNA's annual hard-copy journal); the opportunity to attend JASNA's Annual General Meeting (AGM), possibly the best Jane Austen party on Planet Earth, in a different North American city each year; the chance to go on JASNA's annual tour of England, with access to JA-related sites and artifacts (such as the British Library's entire holding of JA manuscripts) that ordinary Austen-oriented tours don't offer; and the fellowship of almost 5,000 JASNA members in 70 regional chapters across the U.S. and Canada.

To join JASNA, or to find out more about joining, you can go to the JASNA national website's "Membership" section.  Remember that joining JASNA at the national level automatically makes you a member of the JASNA Syracuse Region--this is our one and only regional membership requirement at present.  So join JASNA today and let the world know you're a Janeite!

(NB: Current JASNA members in good standing will receive a reminder note from JASNA national about renewing their memberships, on or about September 1.)

The response to our JASNA Syracuse meeting at Buffalo Street Books (BSB) in Ithaca in March was so positive that some of the attendees are organizing a Jane Austen Book Club of Ithaca, which will also meet at BSB (located in the DeWitt Mall just north of the Commons). JASNA Syracuse will have the same friendly relationship with the JABC of Ithaca as it has had with the JABC at the Colgate Bookstore in Hamilton: Membership in both groups is encouraged, and there will be at least one JASNA-JABC joint meeting (probably in March 2014). The first JABC-Ithaca meeting is scheduled for Wednesday, July 17, at 6:30 pm at BSB, with Sense and Sensibility as the topic. (An especially intriguing note: Costume is optional!)
Posted by Jane at 2:59 PM No comments: