Despite a continuing lack of cooperation from New York State's weather (see the preceding post), JASNA Syracuse and the Colgate Jane Austen Book Club enjoyed a successful joint "Box Hill" event in Cazenovia on Saturday, June 25. In keeping with the "Plan B" for rain agreed upon earlier, JASNA and JABC members met and mingled at Circa restaurant in the village. Below, JABC leader Heather Elia and Sandra Stevens... 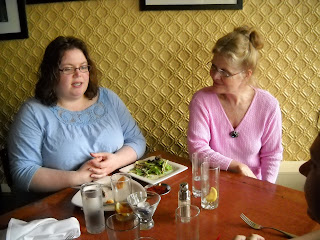 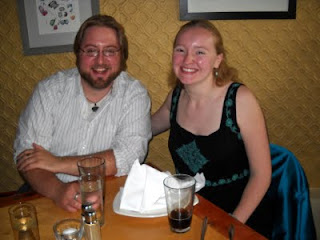 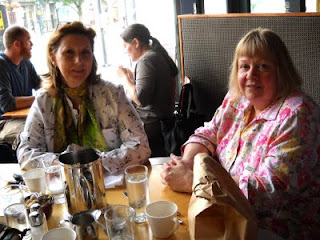 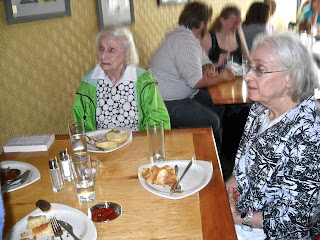 ...and Pym Mumford and Sheila O'Connor. 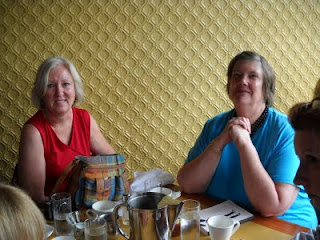 After lunch, we enjoyed guided tours of the mansion and the visitors' center at the Lorenzo State Historic Site, just west of the village. Although the interior of the mansion is decorated in the style of 1900 (the year for which the best documentation is available), the exterior is neoclassical, as befits the 1807-1808 construction dates. And certainly the saga of five generations of largely collateral inheritance by successive Lincklaens, Ledyards, Fairchilds, and Remingtons (see the Friends of Lorenzo website for details) would have intrigued JA herself--and had some echoes of Downton Abbey as well, although entail wasn't involved to the same extent as in the TV series!

Once we completed the tours, some of us ventured on a brief, if damp, exploration of the beautiful grounds. The formal perennial garden, originally laid out by the renowned designer Ellen Biddle Shipman, is surrounded by a small copse that's reminiscent of the "wilderness" at Sotherton Court in Mansfield Park. 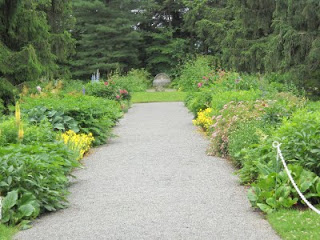 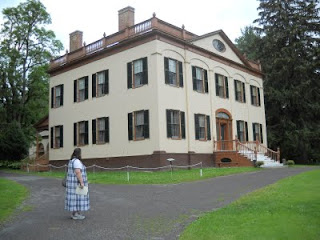 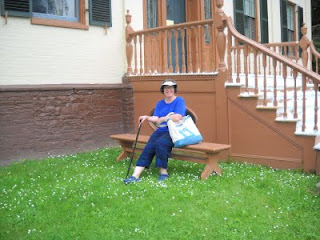 A Belated Report from the Big Apple

I paid a visit to the Big Apple two weeks ago, and I'm only just now getting around to writing about it. My gracious hosts were good friends Meg and Michael Levin (below). Meg and I first met when we were paired as roommates on the 2009 JASNA tour of England; we started making each other laugh on the bus from London to Canterbury, and haven't stopped since! 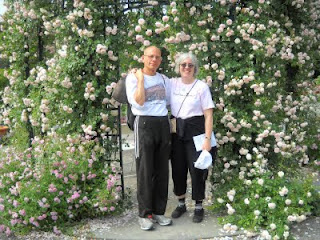 Meg is also JASNA-New York Metro's new co-RC, and the main purpose of my visit was to attend JASNA-NYM's "Box Hill" picnic at the New York Botanical Garden on Saturday, June 11. Alas, the weather on the 11th forced a postponement to the rain date of the 12th--but the substitute activity Meg and I chose certainly made up for the disappointment in my case. Meg saw a notice in The New York Times that the portion of Jane Austen's unfinished manuscript The Watsons to be auctioned off soon at Sotheby's in London would be on exhibit very briefly at the New York Sotheby's, starting that day!! So we met two other JASNA-NYM members, Joyce Melito and Jane Axelrod, there that afternoon for a look at the priceless treasure. (Its auction estimate is 200,000-300,000 pounds--but to Janeites, at any rate, it's priceless. It also may never be on public view again if the purchaser is a private individual rather than an institution, so this may truly have been a once-in-a-lifetime opportunity.) Meg will be in London at the time of the auction and will try to attend it as a spectator, if the crush of other spectators, the media, and bidders isn't too great!

Editorial note: The ms. was open to the passage where Emma is whiling away the tedious hours before the assembly ball with the Edwardses, and Mr. Edwards is making tactless remarks about Emma's aunt's indiscreet remarriage. We saw plenty of evidence of scratching-out and other revisions by JA, but not quite such excessive use of dashes for punctuation as some have claimed.

Although the weather remained overcast on the 12th, the picnic went on at the NYBG's Clay Family Picnic Pavilion, and those who attended had a pleasantly cool day, an excellent potluck spread, and a fine time. Below, JASNA-NYM assistant RC Kerri Spennicchia relaxes with former co-RCs and present 2012 AGM coordinators Nili Olay and Jerry Vetowich. 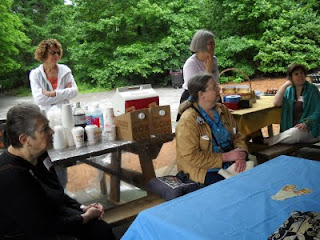 After lunch and a stimulating round of "Jane Austen Botticelli" (a game directed by Jerry and best described as "Twenty Questions on steroids"!), we went our separate ways to enjoy the NYBG. Here, Meg pauses in the new Azalea Garden. 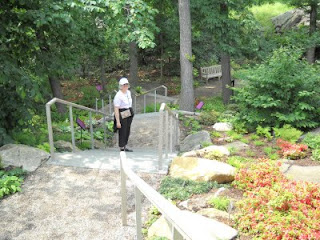 And the roses in the Rockefeller Rose Garden were at the height of their bloom and beauty! 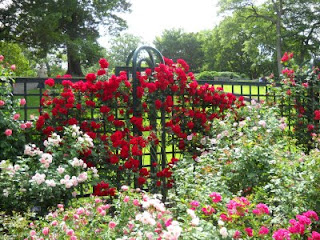 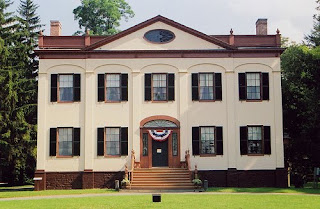 Our plans for the joint JASNA Syracuse/Colgate JA Book Club “Box Hill” event on Saturday, June 25, center on a visit to the Lorenzo State Historic Site. Lorenzo is a beautiful estate just west of the village of Cazenovia, with a neoclassical Regency-era mansion overlooking Cazenovia Lake. For more details about Lorenzo, please see its NYS Parks webpage or the Friends of Lorenzo website.

Our original plan was to meet at Lorenzo for a picnic lunch, to be followed by a tour of the house (which not only is interesting in itself, but contains collections and artifacts from its five generations of inhabitants) and a visit to its gift shop (which offers many items of interest to Janeites--tea things, costume-related literature and accessories, etc.). However, the lovely picnic area at Lorenzo is not sheltered, and the question of what we’d do in case of rain arose in this (to date) unusually rainy season. Therefore, we’ve developed a “Plan A” for fine weather and a “Plan B” for rain. We three organizers (A. Marie Sprayberry and Lisa Brown for JASNA Syracuse, and Heather Elia for the Colgate JABC) will decide on the morning of the 25th whether Plan A or B is in effect, and will notify those planning to attend. (Let us know whether you’d prefer to be emailed or phoned.)

Plan A: We will meet at one of the picnic tables nearest the Lorenzo gatehouse (you can’t really miss them) for an al fresco lunch at 12:30 pm on the 25th. To keep things simple, we ask that each attendee bring his or her own lunch and beverage--although if anyone wants to bring easily managed finger food to share (chips, cookies, cut vegetables, etc.), that’s great. Paper plates and utensils will be provided.

Either lunch plan will be followed at 2:00 pm by a tour of the mansion and a visit to the gift shop. The cost of the house tour is $5 per person, but if there are 10 or more of us, we can get the group rate of $4 per person. In any case, we do need to give the Lorenzo staff advance notice of our visit. For this reason, we ask that if you plan to join us on the 25th, please contact either A. Marie Sprayberry (amsprayberry@gmail.com) or Heather Elia (heatherelia@frontiernet.net) no later than June 15. (No need to RSVP with regrets; just let us know if you’re coming.)

So, rain or shine, we hope you’ll join us on June 25 for a memorable Box Hill event!
Posted by Jane at 9:18 PM No comments: