JASNA Syracuse May Day Meeting in Binghamton, Sat., May 11, 2 pm

Our JASNA Syracuse May Day meeting (a trifle delayed to avoid a conflict with the Rochester Jane Austen Ball) will be held at RiverRead Books, 5 Court Street, Binghamton, on Saturday, May 11, at 2 pm. 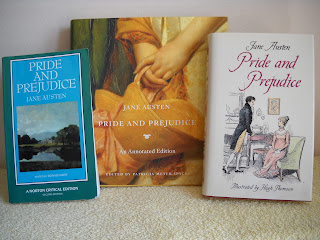 Our topic at RiverRead will be "Pride and Prejudice: Free for All." In this, our final meeting about P&P during its 200th-anniversary year, you're invited to bring topics of your own choice for discussion. Certainly there exist as many opinions about this novel as there are editions and covers of it! (A small sampling of these is depicted above, and Austen scholar Janine Barchas has presented a fascinating slideshow of covers and comments on The New York Times online.)

Issues such as the comparative merits of Mr. versus Mrs. Bennet; the pros and cons of the Collins-Lucas marriage; the various financial questions raised in the novel; and the possible future turns in the Darcy-Bennet marriage have been known to occupy Janeites for hours--and the RiverRead attendees are no slouches when it comes to lively discussion! So, once more, we encourage you to come "have [your] share of the conversation" about the novel Jane Austen called her "own darling Child."

We have received news of more spring Austen-related events--some of which are coming up in the next few days. Our first news reporter is JASNA Syracuse/JABC-CNY member Deborah Knuth Klenck, Professor of English at Colgate University, who writes:


On Tuesday,  I'll be giving a Humanities Colloquium, "Jane Austen's School of Rhetoric: Style, Substance, and 'Delicacy of Mind.'"

Free and open to the public.

In 2010, British textual scholar Kathryn Sutherland stirred up controversy about how much "help" Jane Austen received from her editor(s).  The BBC News website called its leading article "Jane Austen's Elegant Style may not be Hers," and the "story" was similarly exaggerated in the North American media. This talk shows that, despite some irregularities in punctuation and spelling common to her contemporaries, Austen's style is not only HER OWN and carefully honed: her novels teach good style through bad style. The dialogue of (usually minor) characters who combine ignorance with hypocrisy and blatant self-promotion with fulsome flattery shows forcibly "how not to do it," as examples will demonstrate.


And, by the way, congratulations to Deborah on her upcoming breakout session at the 2013 JASNA Annual General Meeting in Minneapolis in September! Her topic there will be "Performing to Strangers: Authenticity in Courtship in Pride and Prejudice."

Our second reporter is Jim Reicker of the JASNA Ottawa Region, with news of two Canadian events--which may be within reach for our members living near the Canadian border:


JASNA Ottawa's upcoming activities include a Pride and Prejudice read-a-thon to celebrate the 200th anniversary of its publication. This will take place on Saturday, May 4, in the Councillors' Lounge of the Ottawa City Hall, 110 Laurier Ave. West, Ottawa, Ontario, from 9 am to 9 pm.

Come, read, listen and meet other Janeites. You may read in the language of your choice. All are welcome. Light refreshments will be available.

FYI: Here's an event, not sponsored by the Ottawa Chapter, but in Prescott, a nearby town in the region.  On April 20 and 21, a one-woman show, "Yours Ever, Jane" starring Sarah Finch. More information at this link.


For more information about the Ottawa read-a-thon, including an approximate schedule, contact Jim (jreicker at gmail.com). 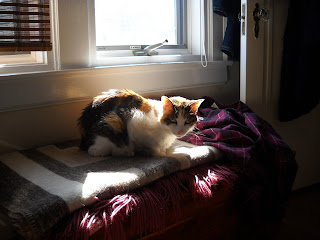 The Official Spokescat of JASNA Syracuse has left us. Lady Mary Wortley Montagu died this morning after a brief illness, in the arms of your Regional Coordinator and her Regency Beau, the humans she owned for thirteen happy years. In medical attendance were Dr. Eric Davis and the devoted staff of Lyndon Veterinary Clinic in Fayetteville--her friends and admirers, as well as health care providers.

Although Lady Mary certainly never let her humans forget who the real head of the household was (in her heyday, her 5 a.m. breakfast call rivaled General Tilney’s “Dinner to be on table directly!”), she gave as little trouble and as much enjoyment as any of us--human or feline--can expect to do in this life. She also took her duties as Official Spokescat seriously, serving as muse for several blog posts and always posing cooperatively for photographs. Noblesse oblige, worthy of the lovely “aristocat” she was.

It is a long-standing tradition in Austenworld that Jane Austen did not care for cats. This seems to be based on the fact that no cats are mentioned in any of the major works, whereas dogs play supporting roles in Sense and Sensibility, Mansfield Park, and Northanger Abbey. However, your RC would like to point out two appreciative mentions of felines in the Letters.

First, JA took a moment in a 1799 letter to Cassandra from vacation lodgings in Bath (the final move to Bath was not made until 1801) to note “a little black kitten runs about the Staircase” as a feature in the Austen family party’s being “exceedingly pleased with the House.” Second, and more significantly, JA actually compared herself to a cat in a later message to Cassandra: In an 1813 letter from brother Edward Knight’s grand estate at Godmersham, she made several inquiries about domestic economy at home in Chawton, and concluded with this observation: “My present Elegancies have not yet made me indifferent to such Matters. I am still a Cat if I see a Mouse.”

Bon voyage, Lady Mary.  And may the Mice be plentiful.