Weary of our winter weather? Don't despair; spring is coming--and the JASNA Syracuse Region is making plans for it!

First, we'll be holding another of our informational meetings on Saturday, April 10, at 2:00 PM--this time at RiverRead Books, 5 Court Street, Binghamton (www.riverreadbooks.com). Your Regional Coordinator will present information about JASNA and membership in JASNA. Then, as this meeting's example of "what we talk about when we talk about Jane Austen," Co-Coordinator Lisa Brown will discuss the "quarter days" on which Austen and her Regency contemporaries would have conducted various business matters: Michaelmas (Sept. 29), Christmas, Lady Day (March 25), and Midsummer (June 24). Finally, as a special treat, two Binghamton-area country dance musicians will favor us with a few tunes!

Then on Saturday, May 22, also at 2:00 PM, we'll be hosting a second meeting at Books and Memories, 2600 James Street, Syracuse. This meeting's topic will be "In the Garden with Jane Austen" (and we'll certainly be referring to the splendid book with that title by longtime JASNA national member Kim Wilson). We'll look at pictures of the beautifully restored garden at Jane Austen's Hampshire home, Chawton Cottage; talk a little about Regency-era gardening fashions and trends; and share some garden-related passages from the novels (attendees should plan to bring their favorites!).
Posted by Jane at 10:14 AM No comments:

Our sister region, JASNA Rochester, will be having a special meeting on Saturday, April 17, at 11:00 AM. Professor Peter Graham of Virginia Tech University, one of the national JASNA organization's three Traveling Lecturers for 2010, will be speaking on "Jane Austen and the Labor of Leisure." The presentation, which is funded in part by a JASNA Traveling Lecturer grant, will be held at the Rundel Auditorium in the Downtown Rochester Public Library, and will be followed by lunch at the library's in-house branch of the Simply Crepes restaurant. There will be a $25 charge for the event, but in your Syracuse coordinators' opinion, it should be well worth it. A registration form is available at the new JASNA Rochester website (see the "Links" list at right).
Posted by Jane at 10:02 AM No comments: 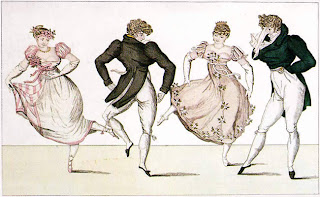 Have you ever wanted to dance like Emma and Mr. Knightley, Catherine and Henry Tilney or Elizabeth and Mr. Darcy? Here's your chance to learn how. No partner needed. Lots of fun in a low pressure atmosphere.

Beginner sessions Feb. 14, 21, 28 & Mar. 7 will teach the basics of English figures and style in the context of simple dances. Newcomers are urged to attend all of these. Ball Preparation sessions continue Mar. 14, 21, 28 and Apr. 11, 18 & 25, offering a chance to learn & practice dances that will be done at the Jane Austen Ball on May 2 – strongly recommended for Ball registrants who don’t dance regularly. $5 per class or $40 for all ten.

http://www.rochestercontra.com/
Posted by Jane at 4:43 AM No comments:

The staged reading of the 1798 Elizabeth Inchbald play Lovers' Vows at the Colgate Bookstore in Hamilton on Saturday, February 13, was a highly enjoyable event for cast and audience alike. Members of the Colgate Jane Austen Book Club and JASNA Syracuse (there is some happy overlap between these two groups!), plus several brave members of the local public, read the roles.

Below, Anhalt describes the nature of good versus bad marriage to Amelia. (A local daughter and mother, members of the audience, look on at right.) 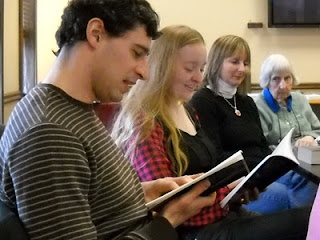 Next, Agatha prepares to spurn a purse of gold sent by the Baron to relieve her financial distress (she misinterprets it as an attempt to buy her off). Three dollars' worth of pennies tied up in a cloth napkin makes a very satisfactory "thunk" when it hits the floor, incidentally! Frederick is at right. 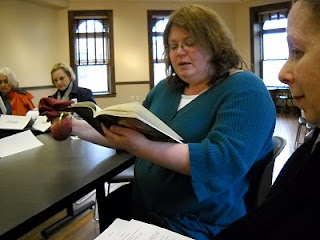 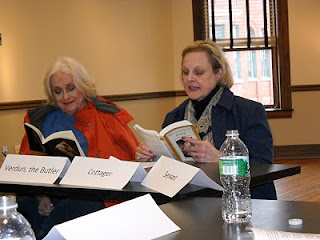 And for those of us who just can't get enough Austen-related acting this month, remember that JASNA Rochester will be doing a reading of "The Trial of William Walter Elliot" from the JASNA Script Bank this coming Saturday, February 20 (see "Events" at right for details).

P.S. The Colgate student newspaper has also reviewed the presentation (http://www.maroon-news.com/austen-fans-act-out-1.1163939). And Deborah Knuth Klenck has identified the helpful spectator who played the Countryman in Act I as E. Adger Williams.
Posted by Jane at 9:49 AM No comments:

The Colgate Bookstore Jane Austen Book Club will be hosting a dramatic reading of Lovers' Vows at the Bookstore (3 Utica St., Hamilton, NY) this Saturday, February 13, at 2 p.m. Lovers' Vows, of course, is the play the young Bertrams and Crawfords choose for their home theatrical performance in Mansfield Park, to Fanny Price's horror and to the ultimate detriment of several budding relationships. The play was freely adapted by the English actress Elizabeth Inchbald from the German play Das Kind der Liebe (The Child of Love) by August von Kotzebue. Members of the Colgate JABC, JASNA Syracuse, and the local public will read the parts (there are still some openings; call 315-228-6944 if interested in volunteering). The performance is free, refreshments will be served, and a fine melodramatic time should be had by all. Your Regional Coordinator is particularly looking forward to donning a pink and blue cloak and playing the part of Count Cassel, with his well-known two-and-forty speeches! Do plan to attend.
Posted by Jane at 4:11 PM No comments: