The 2013 JASNA Annual General Meeting in Minneapolis, “Jane Austen's Pride and Prejudice...Timeless,” is now only a few days away--and I decided this year that I would commission a new gown for the occasion. “Old Gold” (the Indian-made frock that I purchased many years ago at the Erie Boulevard Salvation Army in Syracuse, because of its vague resemblance to a Regency ball gown) is finally ready for retirement.

But where, you might ask, would I find a "mantua-maker" (the Regency term for a dressmaker) for a bespoke ball gown in the Syracuse Region? The JASNA New York Metropolitan Region, of course, has its own talented mantua-maker: Maureen O'Connor, whose work has recently received much-deserved praise in Deborah Yaffe's book Among the Janeites. But is such another seamstress to be found here in the wilds of Upstate?

The answer is yes! JASNA Syracuse member Sandra Stevens draws inspiration from fashion plates of the period, chooses exquisite materials, does meticulous work, and consults her clients’ preferences throughout the process of creating a gown. And Sandra does millinery as well. Here, her daughter Mimi wears a complete Stevens ensemble at the fashion show conducted by Lisa Brown at the Colgate Bookstore in March 2012. 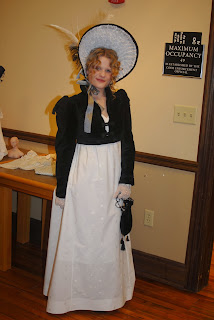 Below, your RC and her mantua-maker proudly show off the new gown. Although I’m memorizing a few of Lady Catherine de Bourgh’s lines in readiness for the banquet and ball in Minneapolis--since I suppose Lady Catherine is the Pride and Prejudice character I most resemble in this costume--I am certainly the opposite of “most seriously displeased.” In fact, I’m “most seriously pleased”! 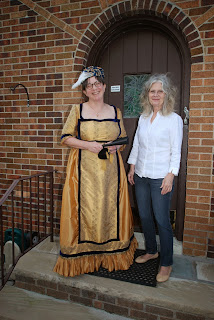 Sandra can be contacted at sndrstvns at gmail.com. 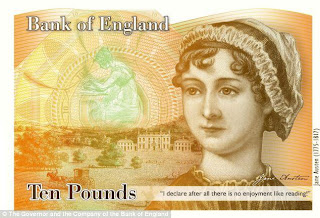 On Saturday, September 14, at 2 pm,  in the Sargent Room of the Liverpool Public Library (310 Tulip St., Liverpool), our Michaelmas meeting topic will be “Jane Austen and the 10-Pound Note.”

The Bank of England has recently announced its plan to feature Jane Austen on its 10-pound note as of the year 2017--so, using this as our inspiration, let’s talk about money in the novels and in JA’s own life. What were different characters’ incomes or dowries? What kinds of lives were they able to afford on these sums, and how did their money (or the lack of it) affect the decisions they made? What did different consumer goods and services cost? How did JA’s limited income during her lifetime affect her perceptions and her writing? All these topics and more are fair game!

The following two articles (published in JASNA’s journals and available online) provide helpful background information for this discussion. They certainly aren’t “required reading” for attending the meeting, but they are both instructive and enjoyable. Handouts based on these articles will be provided at the meeting.

And before we start the discussion, two door prizes will be awarded for the first correct answers to two (fairly easy) questions about incomes. So come and "have your share of the conversation"--as well as a chance at one of the prizes!

P.S. Some members have expressed interest in whether the new film Austenland will be showing in the Syracuse area. At the moment, your RCs know of only two Upstate openings for the film: on Friday, September 13, at Pittsford Cinema 9 on Rt. 31 in Pittsford (near the Barnes and Noble where JASNA Rochester meets); and on Friday, September 20, at Cinemapolis on 120 E. Green St. in Ithaca. If we have any more information by meeting time, we'll certainly pass it along.