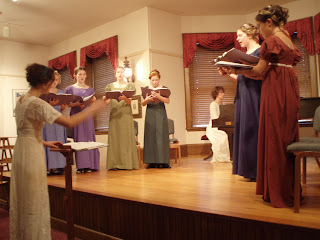 Here's a slightly belated review of the concert given by the "Jane Austen Singing School for Young Ladies" at the Skaneateles Library on November 21. Your Regional Coordinator attended the concert along with new JASNA member Sophia Battaglia (and, at the gracious invitation of Miss Joanna Manring, assisted in welcoming the audience). Under the capable direction of Miss Manring, the seven Young Ladies--the Misses Ellie Crough, Sofia Darovskikh, Phoebe Glowacki, Christina Marshall, Hana Polachek, Olivia Sheppard, and Chloe Strang--acquitted themselves admirably. The selection of songs from JA's period (some from her actual hand-copied collection) included several that are familiar to viewers of film and television adaptations, such as "Slumber, Dear Maid" and "You Who Have Tasted Love's Mystic Spell" from the 1995 BBC Pride and Prejudice, and "Weep You No More, Sad Fountains" and "The Dreame" from the 1995 film of Sense and Sensibility. The songs were interspersed with readings from the novels and letters--and your Coordinator was extremely pleased to learn that the Young Ladies have been studying the Regency period this autumn in various other ways (including experimenting with recipes that would have been familiar to JA). Altogether, a splendid time was had by all, and we can only hope that this is the first in a long series of public performances by the School.

P.S.: Here's a link to another review of the concert, with quotes from Miss Manring's opening remarks about the School and its studies (http://www.cnylink.com/cnynews/view_news.php?news_id=1259587639).
Posted by Jane at 6:42 PM No comments:

JA Exhibition at the Morgan Library

The Morgan Library and Museum in New York City is having a very special exhibition this fall and winter. "A Woman's Wit: Jane Austen's Life and Legacy" opened November 6 and will run through next March 14 (for details, go to http://www.themorgan.org/exhibitions/exhibition.asp?id=22). The Morgan holds the largest collection of Austen manuscripts and other materials in this country, and it sounds as if any CNY Janeite who can possibly make it down to the city to see it should do so. Your Regional Coordinator, indeed, will be visiting the metropolis soon and will bring back a report.
Posted by Jane at 12:18 PM No comments:

JASNA Rochester Regional Coordinator Celia Easton announces: "We will gather on Saturday, December 12, 2009, to celebrate the 234th anniversary of Jane Austen's birth at 11:00 a.m. in the Chatterbox Club, 25 N. Goodman St., Rochester. This gathering is made possible through the invitation of Chatterbox Club member, Sharon Buzard. Our speaker, Amy Green, will address us with a talk entitled, 'An Easy Step to Silence? Politics and Dancing in the Late 18th Century.' The food at the Chatterbox is always a delight--and the popovers are generously distributed."

The cost of the luncheon is $30 per person--but your Syracuse Coordinators make haste to add that it's well worth it and that they are planning to attend. If you decide to do likewise, please mail Celia Easton a reservation at 488 Harvard St., Rochester, NY 14607, with a check made out to JASNA-Rochester (or contact her at easton@geneseo.edu). Registrations must be received by Saturday, December 5.